A Warning To The West: A Voice From The Heart Of The Islamic World 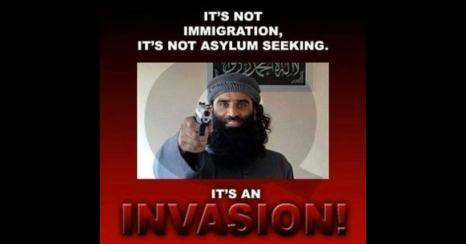 Immigration from Muslim countries should be banned. Period.

To accept Muslim refugees is national suicide.  What has happened in France and Belgium and England will happen in the USA.  Simply look at the 115,000 Muslims congregating in Michigan.

Here’s an article written by a an Egyptian who describes the Muslim occupation of Egypt:

IIslam is not like any other religion. Islam is a supremacist racist political and social ideology wrapped in a thin peel of religious rituals. It seeks domination and supremacy over all other systems and religions. Islam is worse than Nazism and fascism systems combined without any doubt.

The following article is not written with “hatred” or “Islamophobia” or “ignorance” as many will prejudge.

The same accusions Muslims, and their western leftist “useful idiots” usually accuse falsely those who dare to criticize Islam or those who make them listen to what they don’t want to hear about their religion.

These empty accusations don’t intimidate me or will ever silence me as they wish. What I am about to share is the ultimate truth that has been lived, experienced and suffered by me for more than 30 years. This experience was gained by living in my home country of Egypt which is now a pure Muslim society. Like so many others I have been burned by this transformation. This transformation has seen me witness and experience Islam turn my home country to ruins and its followers are now threatening to bring the same fate to your own country.

Followers of Islam believe they are the only righteous people on earth and the only nation who hold the truth. Muslims believe Islam  is the only true religion.

Due to this Muslims believe everyone else who has a different religion, or has no faith and does not follow Islam are“Kaffirs” (a derogatory term means unbelievers). Muslims are influenced by many frivolous koranic verses and hadiths (words and deeds of their prophet) teaching them they are the best nation that has ever emerged on earth. For example, according to surat (verse) 3:110 from the Quran, Allah said to Muslims: “Thus We have made you the best nation, that you be witnesses over mankind and the Messenger (Muhammad) be a witness over you”.