The United Nations has shown that it is anti-Semitic, without the powers of reason and has named Israel as the top oppressor of women’s rights.  How they can publish this kind of drivel is beyond logic.  They totally ignore the fact that Saudi Arabia forbids women to drive, Iran stones women who commit adultery, Egypt performs female genital mutilation, and most Muslim males in Arab countries can beat females with impunity.

On March 24, 2016, the U.N. Commission on the Status of Women (CSW) wrapped up its annual meeting in New York by condemning only one country for violating women’s rights anywhere on the planet – Israel, for violating the rights of Palestinian women.

On the same day, the U.N. Human Rights Council concluded its month-long session in Geneva by condemning Israel five times more than any other of the 192 UN member states.

There were five Council resolutions on Israel.  One each on the likes of hellish countries like Syria, North Korea and Iran.  Libya got an offer of “technical assistance.”  And countries like Russia, Saudi Arabia and China were among the 95 percent of states that were never mentioned.

No slander is deemed too vile for the U.N. human rights bodies that routinely listen to highly orchestrated Palestinian versions of the ancient blood libel against the Jews.

They Stone Women in Iran 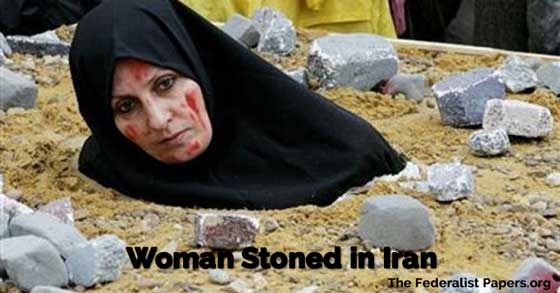 But, the officials at the UN consider Israel, a democratic free state, as an oppressor of women’s rights??