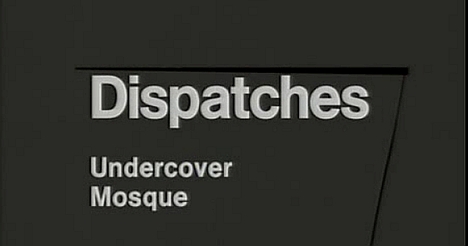 This is truly a shocking undercover film. It exposes the wide network of Muslim radicals and how they have no intention of assimilating with Westerners. The things that are said in this film should make every American and European question what really occurs in these “neighborhood mosques.”

Dispatches – Undercover Mosque from Ole Olsen on Vimeo.
” Marrying off a girl before puberty is permissible.”

None of this has been stopped in Britain by the government, who did not care to protect thousands of children raped, threatened, sold, drugged and many even killed by Muslim men. This mentality amongst Muslims that the video shows, especially Sunni Muslims, will be common in virtually every single mosque not only in Britain, but throughout Europe, Canada, Australia, New Zealand and the US.

The Muslim hatred continues to flourish throughout the country, all because of a weak and incompetent leadership and EU policies that protect hate preachers and terrorism. The permission for Islam to grow and exist– a fascist ideology of the medieval ages– is the root cause of growing terrorism growing and expanding into the West.

It is not difficult to see what Britain’s future will be. Islam is a far greater threat than Nazism. But the Nazi’s did not infiltrate the country and was easier to battle.

Prime Minister Tony Blair recently described tolerance as ‘what makes Britain Britain’ but in this extensive investigation Dispatches reveals how a message of hatred and segregation is being spread throughout the UK and examines how it is influenced by the religious establishment of Saudi Arabia.

Dispatches has investigated a number of mosques run by high profile national organisations that claim to be dedicated to moderation and dialogue with other faiths. An undercover reporter joined worshippers to find a message of religious bigotry and extremism being preached.

He captures chilling sermons in which Saudi-trained preachers proclaim the supremacy of Islam, preach hatred for non-Muslims and for Muslims who do not follow their extreme beliefs– and predict a coming jihad. “An army of Muslims will arise,” announces one preacher. Another preacher said British Muslims must “dismantle” British democracy– they must “live like a state within a state” until they are “strong enough to take over.”

The investigation reveals Saudi Arabian universities are recruiting young Western Muslims to train them in their extreme theology, then sending them back to the West to spread the word. And the Dispatches reporter discovers that British Muslims can ask for fatwas, religious rulings, direct from the top religious leader in Saudi Arabia, the Grand Mufti.