The chief police witness in Parliament testified that on the night of the attacks, an investigating officer, tears streaming down his face, rushed out of the Bataclan and vomited in front of him just after seeing the disfigured bodies.

According to this testimony, Wahhabist killers reportedly gouged out eyes, castrated victims, and shoved their testicles in their mouths. They may also have disemboweled some poor souls. Women were reportedly stabbed in the genitals – and the torture was, victims told police, filmed for Daesh or Islamic State propaganda. For that reason, medics did not release the bodies of torture victims to the families, investigators said.

But prosecutors at the hearing claimed these reports of torture were “a rumor” on the grounds that sharp knives were not found at the scene. They also claimed that maybe shrapnel had caused the injuries. 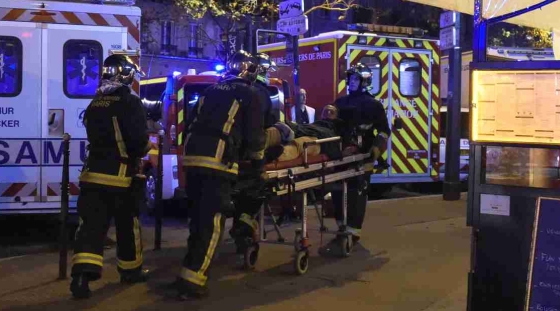 On Friday, Heat Street exclusively broke the news of evidence received by a French Parliamentary committee of gruesome tortures committed on victims at Paris’ Bataclan nightclub last November.  You can find that report here.

Within minutes, our story had spread to the Drudge Report and around the world. Today, we can go further. Heat Street has collected many contemporary reports from various witnesses, all of whom described hearing of torture, most of whom specify torture by knife. One witness talking of knife torture states that she heard the terrorists laugh as they asked a man to drop his pants. These witnesses were men and women from different nations. One of them, below, is on video. We also present contemporary reports by the police that the terrorists threatened decapitations, and by the mother of an attending officer. She says her son saw severed heads.

Finally, we list testimony on Twitter from one of the hostages that she walked on corpses and saw severed heads; and from a man on the French equivalent of Wikileaks recounting torture.

News sources cited include Le Monde, the Times, the New York Times, Le Figaro, Slate France, Paris-Match, the Daily Mirror/ Daily Record, and French regional paper Le Progres.  We also include two at least superficially credible accounts found on Twitter and Mediapart. While all of these accounts appeared sporadically at the time, no media outlet has yet collected them in one place to examine contemporary accounts of torture, and compare them with the accounts of torture given to the Parliamentary inquiry by attending police officers. Should Heat Street discover more contemporary testimony of torture at the Bataclan reported in legitimate news sources, this article will be updated.

“You could hear screams, as if people were being tortured. The terrorists said to us “We are here to subject you to the same things innocent people suffer in Syria. Do you hear those screams, that suffering? It’s so we can make you feel what our people endure every day in Syria. This is war! And it’s only the start. We will slaughter innocents. We want you to pass this message on to everyone around you.”