The original story and headlines are old, circa 2009.  However, the documents that were uncovered helps us piece together a web of interconnecting ties that show how money is moved, ideologies are preached and jihad is encouraged and demanded.  It is important to keep the contents of these documents in mind as we watch civilization jihad spread across the U.S.

HLF was indicted in 2007 for funneling over $12 million to HAMAS.

The Holy Land Foundation was the largest Islamic charity in the United States. Headquartered in Richardson, Texas, it was originally known as Occupied Land Fund.[2] In December 2001, the U.S. government designated HLF a terrorist organization, seized its assets, and closed the organization. In 2004, a federal grand jury in Dallas, Texas charged HLF and five former officers and employees with providing material support to Hamas and related offenses. The prosecution’s theory was that HLF distributed charity through local zakat (charity) committees located in the West Bank that paid stipends to Palestinians who targeted Israeli civilians, or to their families if they committed suicide during the act; that Hamas controlled those zakat committees; and that by distributing charity through Hamas-controlled committees, HLF helped Hamas win the “hearts and minds” of the Palestinian people.

The first trial, in 2007, ended in the partial acquittal of one defendant and a hung jury on all other charges. At a retrial in 2008, the jury found all defendants guilty on all counts. The 2008 trial of the charity leaders was the “largest terrorism financing prosecution in American history.”[3] In 2009, the founders of the organization were given sentences of between 15 and 65 years in prison for “funneling $12 million to Hamas.”[4]

The organization’s website stated: “Our mission is to find and implement practical solutions for human suffering through humanitarian programs that impact the lives of the disadvantaged, disinherited, and displaced peoples suffering from man-made and natural disasters.”

Get more background information from Wikipedia …

.
Department of Justice
Office of Public Affairs
FOR IMMEDIATE RELEASE
Wednesday, May 27, 2009

Today, in federal court in Dallas, U.S. District Judge Jorge A. Solis sentenced the Holy Land Foundation for Relief and Development (HLF) and five of its leaders following their convictions by a federal jury in November 2008 on charges of providing material support to Hamas, a designated foreign terrorist organization.

“Today’s sentences mark the culmination of many years of painstaking investigative and prosecutorial work at the federal, state and local levels. All those involved in this landmark case deserve our thanks,” said David Kris, Assistant Attorney General for National Security. “These sentences should serve as a strong warning to anyone who knowingly provides financial support to terrorists under the guise of humanitarian relief.”

HLF was incorporated by Shukri Abu Baker, Mohammad El-Mezain, and Ghassan Elashi. Mufid Abdulqader and Abdulrahman Odeh worked as fund raisers. Together, with others, they provided material support to the Hamas movement.

Mohammad El-Mezain, 55, of San Diego, California, was sentenced to the statutory maximum of 15 years in prison. He was convicted on one count of conspiracy to provide material support to a designated foreign terrorist organization.

Ghassan Elashi, 55, of Richardson, Texas, was sentenced to a total of 65 years in prison. He was convicted on the same counts as Abu Baker, and one additional count of filing a false tax return.

Abdulrahman Odeh, 49, of Patterson, New Jersey, was sentenced to 15 years in prison. He was convicted on the same counts as Abdulqader.

The Court reaffirmed the jury’s $12.4 million money judgment against all the defendants, with the exception of El Mezain, who was not convicted of money laundering.

From its inception, HLF existed to support Hamas. Before HLF was designed as a Specially Designated Terrorist by the Treasury Department and shut down in December 2001, it was the largest U.S. Muslim charity. It was based in Richardson, Texas, a Dallas suburb. The “material support statute,” as it is commonly referred to, was enacted in 1996 as part of the Antiterrorism and Effective Death Penalty Act. That statute recognizes that money is fungible, and that money in the hands of a terrorist organization — even if for so called charitable purposes — supports that organization’s overall terrorist objectives.

Read the rest of the press release …

Evidence Exhibits use during trial …

CAIR is a “front group” for the Muslim Brotherhood

The Council on American Islamic Relations (CAIR) has been found to have numerous ties to the Muslim Brotherhood and has followed the Brotherhood’s guidelines and dictates.

A Most Enlightening Document was Seized

During the investigation of the Holyland Foundation and its ties, a document was discovered that dated back to 1991 and describes the long-term goals for the Muslim Brotherhood in North America.  It lays out exactly how the Brotherhood will infiltrate and take over America in what is called a “civilization jihad“.

The document was titled “An Explanatory Memorandum on the Strategic Goals for the Group in North America“.  It was dated May 22, 1991.  It outlines a complete infiltration of North America through subversion, infiltration, propaganda, use of US freedom of speech and anti-hate laws to silence critics, political intimidation, physical intimidation and outright violence. 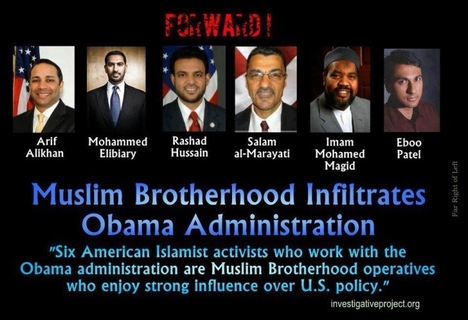 Muslim Brotherhood affiliates have infiltrated the highest levels of our government.

The following is an analysis of the Explanatory Memorandum


The Enablement of Islam in North America – presents Islam as a civilization alternative.

· The general strategic goal of the Group in America which was approved by the Shura Council and the Organizational Conference for the year 1987 in “Enablement of Islam in North America, meaning: establishing the effective and stable Islamic Movement led by the Muslim Brotherhood which adopts Muslims’ causes domestically and globally, and which works to expand the observant Muslim base, aims at unifying and directing Muslims’ efforts, presents Islam as a civilization alternative, and supports the global Islamic State wherever it is”.

· In order for Islam and its Movement to become “a part of the homeland” in which it lives, “stable” in the land, “rooted” in the spirits and minds of its people, “enabled” in the lives of its society and has firmly-established “organizations” on which the Islamic structure is built and with which the testimony of the civilization is achieved, the Movement must plan and struggle to obtain “the keys” and the tools of this process in carry out this grand mission as a “Civilization Jihadist” responsibility which lies on the shoulders of Muslim and – on top of them – the Muslim Brotherhood in this country.

Grand Jihad in eliminating and destroying the Western civilization from within

· The process of settlement is a “Civilization-Jihadist Process” with all the means. The Ikhwan must understand that their work in America is a kind of grand Jihad in eliminating and destroying the Western civilization from within and “sabotaging” its miserable house by their hands and the hands of the believers so that it is eliminated and Allah’s religion is made victorious over all other religions. Without this level of understanding, we are not up to this challenge and have not prepared ourselves for Jihad yet. It is a Muslim’s destiny to perform Jihad and work wherever he is and wherever he lands until the final hour comes, and there is not escape from that destiny except for those who chose to slack. But, would the slackers and the Mujahedeen be equal.

· As part of the process is “[the] conviction that the success of the settlement of Islam and its Movement in this country [America] is a success to the global Islamic Movement and true support for the sought after state [caliphate] God willing.”

The first bullet is a clear threat statement of hostile intent while the second speaks to
foreign agency to a transnational movement with stated objectives that overlap with al-
Qaeda’s. When assessing members who belong to organizations known to be identified
with the Muslim Brotherhood, the inference should be that their designated leaders have
knowledge of its identified roles and missions. It is not reasonable to do otherwise.

The strategic goal of the Muslim Brotherhood in North America is multifold: the
destruction of Western civilization through a long-term civilization-killing Jihad from
within (“by their [our] hands”) and through sabotage (“the hands of the believers”) and,
secondly; to support the global Islamic movement to establish an Islamic super-state, the
caliphate.

When conducting outreach with organizations identified as being a party to the “strategic
goals” identified in the Memorandum, the gain/loss assessment of associating with them
should be undertaken in light of their clearly stated hostile intent that includes the
subversion of American institutions through outreach, strategic deception and perception
management. To undertake outreach with known identified organizations without
knowledge of their objectives is to run the extreme risk of strategic manipulation by
declared Jihad entities in ways that fulfill stated Muslim Brotherhood objectives as
enumerated in the Memorandum.