By Jennifer Newton for MailOnline

A Danish teenager who was sexually assaulted near a migrant asylum centre has been told she will be prosecuted after using pepper spray to fend off her attacker.

The 17-year-old told police she was targeted in the coastal town of Sonderborg by an English-speaking man, who knocked her to the ground and tried to undress her.

But she managed to prevent the man from attacking her further by spraying the substance at him.

However, as it is illegal to use pepper spray, the teenage girl is set to face charges. It is likely she will face a 500 Krone (£50) fine.

Local police spokesman Knud Kirsten told TV Syd: ‘It is illegal to possess and use pepper spray, so she will likely to be charged for that.’

The man who attacked the girl fled from the scene and has not yet been charged. It is unclear if the man was an asylum seeker or refugee.

However, the case has sparked a controversy in Denmark, where there has been increasing reports of sexual harrassment towards women.

Earlier this month, several females in Sønderborg reported feeling harrassed by the aggressive nature of male refugees at the local asylum centre.

It comes after it was reported that there have been a rising number of sex attacks by migrant gangs across a number of European countries, including in the German city of Cologne.

Read the rest of the story… 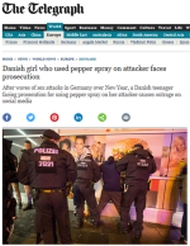