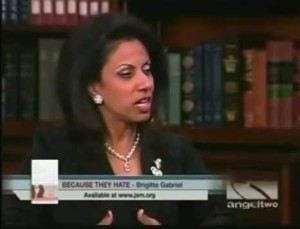 Brigitte Gabriel is the Founder and President of Act for America and is one of the leading national security experts in the world -providing information and analysis on the rise of Islamic terrorism. Ms. Gabriel lectures nationally and internationally about national security and current affairs. Ms. Gabriel has addressed the United Nations, the Australian Prime Minister, members of the British Parliament/House of Commons, members of the United States Congress, the Pentagon, the Joint Forces Staff College, the U.S. Special Operations Command, the U.S. Asymmetric Warfare group, the FBI, and many others. In addition, Ms. Gabriel is a regular guest analyst on Fox News Channel, CNN, MSNBC, and various radio stations daily across America. She serves on the board of advisers of the Intelligence Summit.

Ms. Gabriel is the author of two New York Times Best Sellers, BECAUSE THEY HATE and THEY MUST BE STOPPED. Ms. Gabriel is named one of the top 50 most prominent speakers in America. She speaks Arabic, French, English and Hebrew.