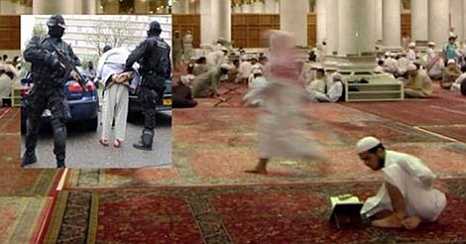 President Obama bends over backwards to minimize the emphasis on terrorism committed by Muslims in the United States.  He is clearly covering for the Islamic terror.  France, on the other hand, just busted 200 masques and found that “In 15 days we have seized one-third of the quantity of war-grade weapons that are normally seized in a year” according to France’s Interior Minister Bernard Cazeneuve.

Unlike Obama in America after an attack, France started immediately raiding Islamic mosques to see what they could find. After all, far too many people in the Muslim community have not been helpful with bringing forth information to authorities there.

France isn’t messing around. They’ve arrested more than 230 muslims and collected more than 324 weapons. Many others are under travel bans and house arrest. They have shut down three mosques and have raided more than 2,300 homes.

And many French leaders have joined those voices in the EU calling for an end to importing Syrian Islamic refugees, as a proper screening process is impossible.

Compare that to the response we saw from President Barack Obama, who tried to blame the attacks on San Bernardino on “workplace violence” for days, while calling on his Attorney General to prosecute those who speak out against radical Islam.